MISHIMOTO - THE MIGHTY HORSE: WHAT IS HORSEPOWER? 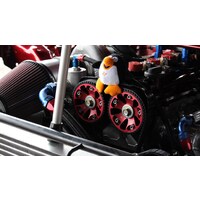 Audiation – the ability to listen to or play music in your head without physically hearing any of it.

Just by reading notes on a page of sheet music, talented musicians can hear the music in their minds. Truly gifted musicians can hear a relatively complex piece of music played once and then repeat it, perfectly, note for note, on their preferred instrument. That’s talent. It’s hard to teach that to just anyone. This is the concept of audiation.

I bring up this musical analogy to illustrate a point. These skills are engrained and conceptualized deep within their psyche and motor functions just as deep as breathing or walking. We, gearheads, have our own concepts that are as commonly used and seemingly simply as notes on a page. But how often do we think about what they really mean?

What does this have to do with this twin-turbocharged, quad-rotary ND Miata piloted by professional drifter “Mad” Mike Whiddet? Anyone can look in this engine bay and safely assume that the engine in question makes a bit of power. I mean, just look at it! Horsepower is a term we toss around all the time, but how often do we get down to the basics of what it really means? It’s not like you can go outside and show me a horsepower.

Sure, we know that there are motors that make well over 1000 horsepower, and we know the result is fast, but what does that mean? What is the idea behind horsepower as a unit of measurement? I surely didn’t know how to put it into words. Like musicians with a deeper knowledge of what those notes on a page mean, I think we can all expand our knowledge of this basic concept we use all the time.

Let’s Hoof It
You have to remember that the concept of using controlled explosions inside a machine to produce power is relatively new in human history. The idea has been around for hundreds of years, but for many centuries beforehand, humanity primarily used horses for the heavy work – hauling the goods, plowing the fields, traveling great distances, etc. When you think about it, as a species, we have far more experience using horses than internal combustion engines, so naturally, we’d compare the power of the earliest engines to how much work a horse could do. Specifically, the work capability of your average “draught” (fancy word for work) horse was the standard method of measuring work, with the units being measured in foot-pounds per minute. What comes next gave me a really intense eureka moment.

Since “work” is defined as a force applied to a body and moving it a certain distance, the amount of work can be calculated by multiplying the distance moved by the force (or weight of the body) over a period of time. Since a horse was the standard, it was decided that your average draught horse could lift 100 pounds and move it 330 feet in one minute, which is a just over 100 meters to all of my runners out there. Since our theoretical horse took one minute to move 100 pounds in the same distance Usain Bolt has broken world records in, we can calculate the total amount of work (force x distance) to give us a total of 33,000 foot-pounds per minute; in short, that equals 1 horsepower. This horse’s work rate is a consistent measure of power, and it became the standard measurement called: horsepower…eureka!

So let’s recap with some math:

The above equation is simply telling us that to calculate engine horsepower, you need to divide the total amount of work done over the constant of 33,000. That’s it. Do you know how long I’ve roamed this Earth without knowing that equation? 26 years. I can say I’ve made it this far without it, but I am proudly more nerdified now that I know it.

Now this is a purely theoretical number without a real world application. The type of instruments we use to measure power must account for things like power loss within the system, but what you should take away from this is the basic meaning behind the terminology of horsepower.

To celebrate getting through that wall of text, here is a picture of Ryan Tuerck’s high-horsepower Toyota FR-S slaying tires at Wall Speedway, NJ during a practice session at this year’s fourth round of the Formula Drift professional championship drift series.

Let’s take a look at this idea in motion. Imagine Tuerck’s motor takes the place of the horse in that graphic I showed you earlier. If he is making 850 hp at the crank (we’ll get into that terminology later) we can figure out the rate of work.

Here’s some quick math. In order to solve for x, you need to multiply 850 * 33,000. This gives you a rate of work of 28,050,000 ft. lbs. Let’s say, this engine is lifting a weight of 4,000 lbs. With the given variables, the engine can do a rate of work of 4,000 lbs at 7,012.5 feet per minute. Strictly going off of the idea of said equation, that engine would be able to lift two tons at a speed of just under 80mph. Again, this is based on our horse attached to a weight idea, replacing the horse with a motor. We know that Tuerck’s car is capable of going faster than 80mph, but that is power pushing in a horizontal motion instead of a vertical motion.

An aside: Torque
As I was writing this piece, I immediately realized that there was one thing I couldn’t leave out. The idea behind torque, although simple, goes hand-in-hand with horsepower. So I’ll quickly go over the fundamental idea.

Torque isn’t just a 2004 film featuring the rapper Ice Cube as the leader of a ruthless biker gang in Southern California (look it up if you haven’t seen it, very entertaining). It is a measurement of force in a twisting motion. Imagine a monkey wrench that’s horizontally clamped on a piece of pipe. If you were to exert a downward force of one pound exactly a foot from the center of the wrench, you are exerting a force of one lbs. ft. of torque. This makes the equation for torque, force multiplied by distance. Pretty easy!

Torque is tied to an engine’s brake horsepower (bhp; we’ll get into that in a second) but engines can be turned in many different ways to focus on more torque at lower rpm or more horsepower at higher rpm. It increases with power, but the engine does have an optimal fuel mixture. Once the engine reaches this point, torque is maximized. Anything beyond that point and you will see torque start to dwindle.

BHP vs WHP
You may ask yourself; how is all of this technical mumbo-jumbo, applicable to you, a real-world, everyday automotive enthusiast? Let’s tie everything we’ve learned so far back into the original idea behind horsepower. There is a difference between the the power you get from an engine and the power you get from an entire car. Brake horsepower (bhp) is the power recorded when an engine is hooked up to a device called a Prony brake. A Prony brake is an engine dyno that calculates the power an engine makes at the crank. This is not to be confused with a chassis dyno, where the power output is measured by the wheels. This is the more common method of determinig engine power, although there are several factors that can affect it.

There isn’t much beyond engine tuning that can affect the peak bhp number when talking about the engine itself. What you see is pretty much what you get. With whp, there are frictional forces that steal power before the wheels even start turning. Things like the flywheel, clutch, driveshaft, brake drag, rolling resistance of tires, and other mechanical osses drain away part of the potential power. This is called a drivetrain loss and it can range anywhere from 10%-30%, depending on multiple factors, a big one being whether the application is all-wheel-drive or rear-wheel-drive.

Most car manufacturers use what the engine puts out on the engine dyno as the horsepower rating they advertise. So let’s say we have a RWD car that is rated at 155bhp. The car may be dyno tested at 140whp due to drivetrain loss. It could, however, conceivably achieve a 5whp gain by, switching to a one-piece driveshaft, installing a lightweight flywheel and clutch, or using lighter wheels. All of this can be done without the use of power-producing products such as an intake or an exhaust. The bhp won’t change because that is only the engine’s power output number, but the power to the wheels will increase because the drivetrain loss is lowered by reducing the friction the power must overcome to get to the wheels.

As you are probably well aware, chassis dynos are way more commonplace. Engine dynos are expensive, hard to find and even harder to use. These Prony brake machines are generally reserved for high level racing teams where every single aspect of the car must be dialed in. Chassis dynos give an idea of the type of punch the car packs as a whole, not only the motor itself.

That was a lot of information. I know it’s going to be useful to someone out there; writing about this has certainly taught me a few things. Think of it this way, now you can school some of your fellow car buddies at the next car meet or motorsports event. This is an idea that I am confident that most of us could be educated on since the idea at its most basic is a pretty abstract idea that I can say only a few actually get. Even fewer take the time to dig into the details. Now, we should be just as fluent with this concept as musicians are with their musical notes. We can now visualize and conceptualize what horsepower means at its bare core.